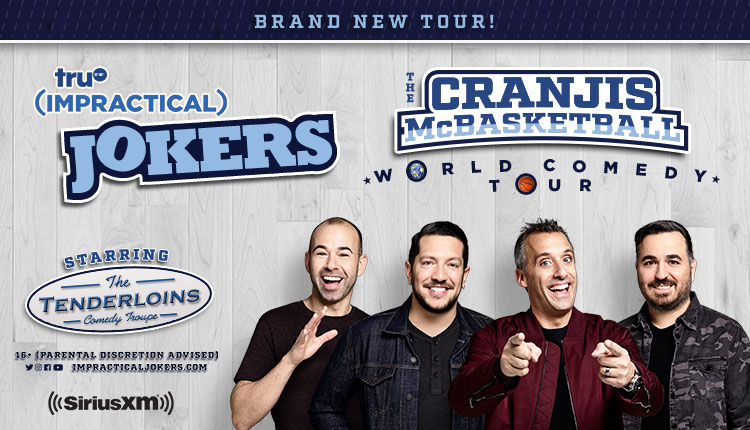 Critically acclaimed, world-renowned comedy troupe, and stars of truTV’s hit series Impractical Jokers, The Tenderloins have announced their upcoming tour The Cranjis McBasketball World Comedy Tour - Starring The Tenderloins is coming to Honda Center! The tour will feature completely new material and hijinks for audiences across the globe. In addition to touring, The Tenderloins continue to have a very busy year with plans of an official Impractical Jokers feature film produced by Funny or Die. TruTV also renewed the show for a 26-episode eighth season that will extend the series on truTV through 2019 and beyond, 200 episodes in all.

The Tenderloins is a New York-based comedy troupe, whose four members - Joe Gatto, James Murray, Brian Quinn and Sal Vulcano - are the creators, executive producers and stars of truTV’s hit series, Impractical Jokers. After years of performing live improv and sketch comedy shows, The Tenderloins crossed over to the web, garnering millions of views for their internet sketches, eventually creating the runway success Impractical Jokers for truTV. Impractical Jokers is top 5 in its time slot on cable in the US and is the #1 show on Comedy Central in the United Kingdom and India.

***Purchase of this M&G DOES NOT include a ticket to the show. This is an upgrade ONLY!***
***Separate ticket required for entry.  Patrons without a SHOW ticket will NOT be allowed into the venue. NO exceptions!***